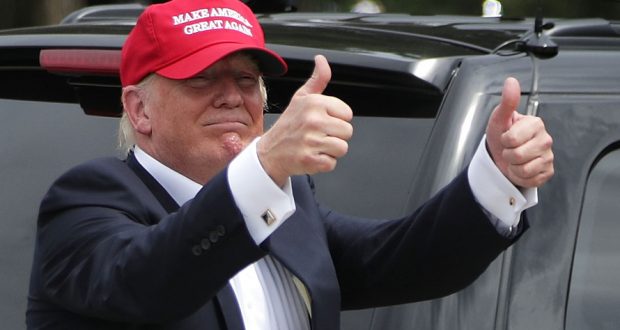 So much has happened in the world since we last blogged here at Gospelbrew. So it would be remiss of us not to comment (belatedly) on perhaps the most unlikeliest of victors: Donald Trump. Because, of course no one else has written articles about the matter.

Sarcasm aside, he apparently rose to power on the back of disenfranchised Americans, sick of the political game, he rose with the support of some major evangelical Christian leaders, and he rose to power with his catch phrase, “make America great again.”

Greatness is depends on how you define it, doesn’t it? Greatness for me might involve maybe getting a request for an interview by an obscure content channel. “Woo-hoo” I’d cry – now I’m great.  Achieving greatness for some is akin to achieving immortality. Louis Armstrong will live on for his great achivements. So will Caesar, Marie Curie, Alexander the Great (that fit nicely); and a lowly carpenter in backwaters of Nazareth. Greatness for President Trump, in the business world, might have involved profit margins, or happy shareholders. Greatness for a large, driven church might mean more campuses, or a new building or an album. Striving for greatness is the reason behind some of humanities greatest achievements.  I don’t think the pursuit of greatness makes anyone or anything bad – It seems that it’s more important how we define it.

“How great is our God?” our Christian songs enquire. Pretty great. Very great. ‘Insert superlative here’ great. So the very essence of immortality, of greatness himself has said some things about greatness that have apparently been overlooked by our latest POTUS. The irrefutable laws of greatness, from the personification of greatness himself: (Not Maxwell, the other leadership guy)

If only it was true greatness that America was aspiring towards. Be willing to be last. Service of others, at the expense of self. Humility and the giving up of power to assist others. “What?” I hear some of you argue. “We’d be vulnerable to people abusing this! People would take advantage! We’d lose our status. We’d lose our wealth.” But true greatness is costly, as our carpenter God has shown us. Ultimate costs were involved. And of course, politics can never go about achieving greatness in the same way carpenters can. But it’s the definition that is important, and something I pray President Trump will come to change.

Then I think the world would cheer along, and talk about how Great America truly is.