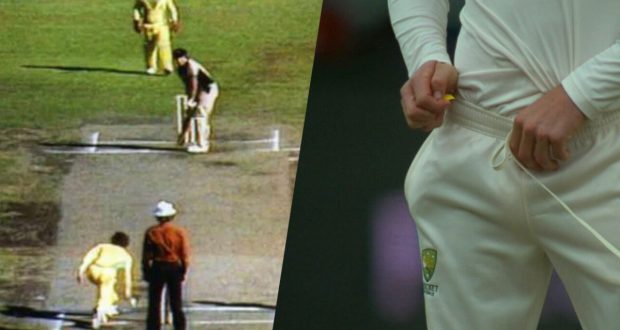 Steve Smith, What have you done? Australia, and the world of cricket are in shock.

Our golden boy, Steve Smith, perhaps the best since Don Bradman, the captain of the Australian cricket team; has admitted to trying to cheat through ball tampering. For the uninitiated, ball tampering is when you use a foreign object to modify the condition of a cricket ball in order to make it easier for batsmen to be dismissed, and it’s serious business. It’s strictly against the rules of Cricket and consequences will be dealt out for both Smith, and Australian cricket’s reputation in due course. As a supporter, it hurts to be associated with that tainted reputation.

But it’s not the first time Australian cricket’s reputation has been damaged. There was one other memorable occasion, where another golden boy, Trevor Chappell (under the orders of his brother) damaged Australia’s reputation with a perfectly legal delivery. An underarm delivery was bowled to prevent a six being hit off of the last ball – which was perfectly within the rules.

So keeping the rules, it seems, isn’t always helpful either.

All this reminds me about the Christian gospel. There are only two types of people, scripture says. Ones who ride roughshod over the rules, doing whatever they like, and the ones who studiously keep the rules. The gospel says that they both have it wrong. Rules in cricket exist because we don’t love the purity of the game enough. Playing for joy is not the only thing that drives us – winning drives us, glory drives us. In a similar way, moral rules only exist because we’re incapable of truly living. True humanity, the kind of humanity that Jesus modelled, eludes us – and we’d rather make our human lives about self and winning. And you can’t win if you don’t know the rules.

Christians, are rule obsessed. At least, a significant portion are. They think that if they keep the rules, and encourage others to keep them that they will win God’s favour. God will owe them.

Many things God asks us to do are not fair. It’s not about being fair; it’s about passing the test. If you’ll do the right thing when it’s hard, God will make it up to you.

Do the right thing and God will make it up to you. Follow the rules, and you’ll win. When Christians like this feel like we’re losing (suffering and loss) – we question why we ever kept the rules if God wasn’t going to keep us safe, healthy or wealthy. We’re just like Trevor Chappel – keeping the rules but not truly, not really playing, for the love of the game. We’re yelling ‘cheater’ at the Smiths of the world, not because we love the game, but because it means we can’t win. And that makes us furious.

Smith is copping it, and to be honest, he made the decision, it’s a poor one, and it’s going to cost him. But he’s the easy case. He knows he is guilty, and accepts his consequences. Having the game he loves deep down, tainted and tarnished will make him remember what it’s all about, hopefully. It’s not people like him that scare me. It’s the rule-keepers in the world; at least the ones who haven’t realised how their rule keeping is damaging the game. It’s those who know the rules so well. The moral ones who think they’re better than the cheaters. The ones so quick to pass judgement. It’s they who make me nervous. They are, after all, the same crowd who killed God himself at Easter long ago.

So as a chronic rule keeper and rule breaker – (i’ve done it all) I can’t throw the cheaters under the bus and join the pitchfork mob. I’m saddened that their rule-breaking cheapens the things I love. But if cheaters make your blood boil – then we have to take a good hard look at ourselves and ask if we’re not merely obsessed with the rules in order to win? God help us to truly live – not to win, but for the love of the game.