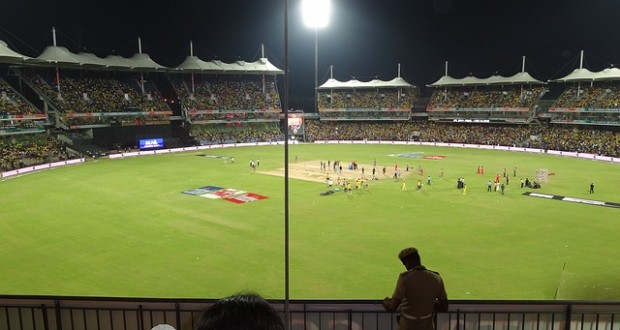 Easter, Cricket and the Gospel

I’m sitting here watching the Aussies thump New Zealand in the One Day Cricket World Cup Final, and thinking about lucky I am to be an Australian.

And in less than a week’s time we celebrate Easter, the most holy day in the Christian calendar, the time when I think how lucky I am to be a Christian.

You could say that the battlefield on the Cricket pitch is a bit like the spiritual battle between good and evil that penultimately played out at Easter. But unlike the Australian match, where Michael Clarke lead an Australian team to victory by defeating New Zealand – the easter story is much more dramatic.

The scene is set. The teams are chosen and the field is in. The devil and his ‘bad’ team are bowling, with Jesus and the ‘good’ guys batting. At Easter, as it were, the devil and his team celebrate with the wicket of Christ – before miraculously DRS brings him back from the dead and he hits the winning runs, beating the enemy forever.

This is a light and humorous analogy but what really matters, is what role we see ourselves playing. Many Christians view Easter as if they were the spectators, the fans in the crowd cheering on ‘good team Jesus’. They go silent when Jesus falls in disbelief, only to cheer on in a frenzied excitement when the review comes back. Jesus is still in.  “Jesus wins, and so do we!” they chant, as it were, as they berate the supporters of the losing team. “Join us” they say, “become like us – support the winning team like we do”, “choose life”.

We’ve forgotten that we aren’t in the sidelines. We were the ones who in anticipation of the end of Christ, picked out field placings, bowled our overs and sledged with all the venom we could muster. In the Easter story – it’s us. We are the ones who killed Christ.

In the hymn, “How deep the father’s love for us”, Townsend states it perfectly:

Behold the Man upon a cross My guilt upon His shoulders Ashamed, I hear my mocking voice Call out among the scoffers It was my sin that held Him there Until it was accomplished His dying breath has brought me life I know that it is finished

The Easter story is not a story of God defeating those who had made God their enemy – but of God laying down his life – of choosing victory through defeat – that he might win his enemies over. Victory always comes at great cost – but in this  battle,  it was paid at his great expense. Not ours. The Apostle Paul states in Romans 5:10

For if, while we were God’s enemies, we were reconciled to him through the death of his Son, how much more, having been reconciled, shall we be saved through his life!

This knowledge is incredibly humbling – and changes how we see those who disagree with us. I’m not a Christian because I chose to be – I’m now lucky enough, as it were, to be on Jesus side. I cannot look down upon those who think my faith is archaic, or old fashioned, or out of date, or just plain wrong.

If you know and love Jesus, then stop and have a think how lucky you are that despite your best efforts, Christ won! Contemplate how that should affect how we treat others with humility.

And if you don’t know Jesus, then I pray that you would be able to forgive arrogant self righteous Christians, but even more so that you would experience Christ’s love this Easter – and you too would know that YOU were the prize that Christ endured the cross for.