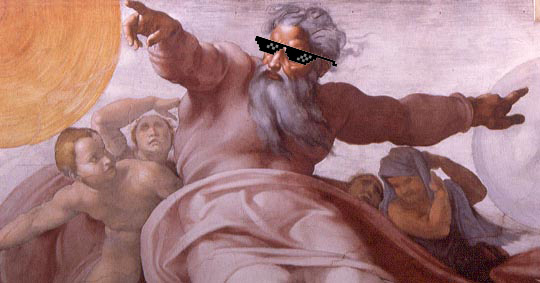 Deal with it? Is God an angry Judge?

One of the objections I hear about the Christian faith goes something like this;

“I don’t understand how could a loving God send people to hell.”

At first glance there does seem to be a contradiction here. A Loving God? Judgement and Hell? Surely not. The argument concludes that God is therefore a bully – who destroys those who don’t believe in him, or that this apparent contradiction means that God can’t exist.

Deal with it? Is God really an angry Judge?

The common image our culture has of this, is one of God frowning sternly, and passing judgement; ordering his angels to drag someone, kicking and screaming into an abyss… But strangely, this isn’t the image the Bible paints. Lets look at the story of the rich man and Lazarus, found in the gospel of Luke, Chapter 16:19-31.

There was a rich man who was dressed in purple and fine linen and lived in luxury every day.  At his gate was laid a beggar named Lazarus, covered with sores and longing to eat what fell from the rich man’s table. Even the dogs came and licked his sores.

The time came when the beggar died and the angels carried him to Abraham’s side. The rich man also died and was buried. In Hades, where he was in torment, he looked up and saw Abraham far away, with Lazarus by his side. So he called to him, ‘Father Abraham, have pity on me and send Lazarus to dip the tip of his finger in water and cool my tongue, because I am in agony in this fire.’

But Abraham replied, ‘Son, remember that in your lifetime you received your good things, while Lazarus received bad things, but now he is comforted here and you are in agony. And besides all this, between us and you a great chasm has been set in place, so that those who want to go from here to you cannot, nor can anyone cross over from there to us.’

He answered, ‘Then I beg you, father, send Lazarus to my family, for I have five brothers. Let him warn them, so that they will not also come to this place of torment.’

Abraham replied, ‘They have Moses and the Prophets; let them listen to them.’

‘No, father Abraham,’ he said, ‘but if someone from the dead goes to them, they will repent.’

He said to him, ‘If they do not listen to Moses and the Prophets, they will not be convinced even if someone rises from the dead.’

From this passage we can observe that God didn’t send the nameless rich man to hell. Not only that, but its curious that the rich man never asks to get out. Even though he obviously in torment, he never asks to leave.  Why? It seems that CS Lewis was right when he said that “The doors of Hell are locked from the inside”. 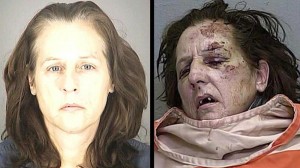 Methamphetamine addiction images like these are graphic reminders of the physical cost of addiction.

Does this sound a little familiar to you? It is. That’s because there’s another hell on earth, that we as humans choose for ourselves: addiction. Substance abuse. An addict is in a self imposed hell of his own making. A downward spiral towards decay and destruction, unto death. No one can fix his addiction for him; only he has the key to free himself; ironically by willingly giving it to another, only by recognising that they have a problem and need outside help can they be freed from their addiction.

Sin as addiction to self

Pastor Tim Keller (whom is one of my key influences on understanding hell) explains that all sin is addiction to self. Christians are simply addicts who no longer live in denial, and who come free of our addiction, relapse and repent and gradually live lives where we forget self, and live for primarily God and secondarily for other people. Addicts have one of two fates: they either hit rock bottom and realise that they need external help; or they continue until their addiction kills them. But what if our addiction is sin? What if our souls never dies like our body to end our earthly suffering? Lewis again, is brilliant:

Again, Christianity asserts that every individual human being is going to live for ever, and this must be either true or false. Now there are a good many things which would not be worth bothering about if I were going to live only seventy years, but which I had better bother about very seriously if I am going to live for ever. Perhaps my bad temper or my jealousy are gradually getting worse -so gradually that the increase in seventy years will not be very noticeable. But it might be absolute hell in a million years: in fact, if Christianity is true, Hell is the precisely correct technical term for what it would be.
CS Lewis – Mere Christianity

Lets look again at the parable of the rich man and Lazarus. The rich man is suffering. He is in pain. But he never asks to leave hell. He wants Lazarus to come to him and make him comfortable there. He demands that Lazarus come and be his errand boy and servant and comfort him while he is in agony. Total self centred obsession. “I’m fine, really”, “I’ve been hard done by”, “It’s not my fault, I didn’t have all the information”, “It’s your fault I’m here” he even insinuates. He wants help – but help for where he is right now. He wants to be enabled to stay where he is – not assisted to leave.  If ever there was a picture of addiction – this is it.

Addicts destroys individuals, yes. But it also destroys society. It destroys our world. The addicted person’s values become irrelevant in their pursuit of their next hit. They destroy themselves. They destroy relationships with everyone around them who do not assist them in their addiction. Family. Friends. Children. Spouses. All are discarded in order to obtain the object of their desires. If you try to raise children in a drug affected area, it’s very challenging. Break-ins, used syringes, unstable people, prostitution, gangs and violence ultimately destroy the very fabric of the community. Addiction rips apart whole families and even cities.  In the same way OUR self addiction, our sin addiction, if left undealt with, will destroy everything around us.

How to help an addict

What can you do for such a person? Save them? But they don’t want to be saved. You could visit them – but they don’t want to be visited. To leave them alone? That’s ultimately what the addicted part of every drug addict wants: To be left alone in their addiction. Being in the presence of someone who is kind and benevolent and ‘got it all together’ is very abbrasive. Being in such a persons presence emphasises their flaws and exposes their selfishness, making life unbearable, and reminds them of how much of a failure they are. To even contemplate bringing such a person into heaven – into the very presence of God – would be merely a different form of hell for them.

In the parable, God is like the parent of an addict stuck in the downward spiral and refusing to acknowledge his addiction. A parent could continue to rescue his child from the consequences of his addiction. But for what end? This only serves to enable the addict to continue in their addiction. A parent could take away the substance – not the desire to obtain it. But, what if, in the case of the rich man, the very substance he is addicted to is himself? Only a change of heart can overcome an addiction. In the parable, God calls the rich man “son” – there’s tenderness and concern here towards his child. Far from God being the angry judge, God is pictured here as an emotionally invested father. God is ultimately poetic in his justice.

“There are only two kinds of people in the end: those who say to God, “Thy will be done,” and those to whom God says, in the end, “Thy will be done.” All that are in Hell, choose it. Without that self-choice there could be no Hell. No soul that seriously and constantly desires joy will ever miss it. Those who seek find. Those who knock it is opened.”
CS Lewis – The Great Divorce

Only someone who has seen up close or been a parent to a child suffering through drug addiction can possibly hope to understand what it is like. Many parents would give their lives to save their child, if it would break through to them. And ultimately, to break through our self obsession – God does that which to anyone but a parent, would be unthinkable. He gives his life for his ungrateful, ugly (and addiction is incredibly ugly) self addicted children.

The cost of defeating addiction

When I understood what my addiction had cost God – it cut me to the core. My actions had forced God’s hand – not towards me in judgement, but outwards – impaled by nails onto a cross, the picture of the death that awaited me; in order that I might finally understand. That I might finally see the ugliness of my addiction and the beauty of a saviour. It’s love that changes hearts. Powerful, uncomfortable, awful, beautiful, unflinching, costly love. Queen Elsa was right; love really does melt a frozen heart. My heart towards God was melted by this love – I was so grateful that I knew that I had to help my fellow addicts, I had to aspire to show them the same self-sacrificing love that changed me so dramatically.

Addicts don’t need to modify their behaviour, they need a change of heart. They need to want help. The good news of Jesus Christ not only enables this heart change, but gives the tools and the power to live a different life.

Timothy Keller: The Reason for God 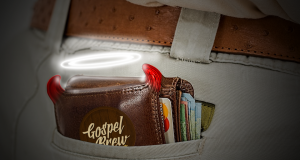 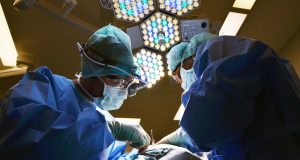